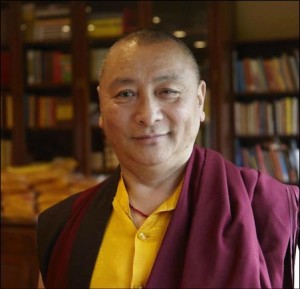 Bardor Rinpoche has a close connection with the Northwest, having taught here for the past two decades.  Palchen (“Great Splendor”) Study Group Seattle was founded in 2015 with Rinpoche’s blessings.

Bardor Tulku Rinpoche was recognized by His Holiness the 16th Gyalwang Karmapa as the third incarnation of Terchen Barway Dorje, an emanation of Nupchen Sangye Yeshe, one of the 25 main disciples of Guru Rinpoche (Padmasambhava). Terchen Barway Dorje also helped revive the lost teachings of the Barom Kagyu. His revealed treasures consists of nine volumes of which our Guru Rinpoche practice, the Continuing Combined Practice of the Vidyadhara Guru, originates from.

What is treasure lineage?
In Tibetan Buddhism a number of lineages can be traced back to Guru Rinpoche (Padmasambhava), the historical Buddhist master who established Buddhism in Tibet and is considered to be the second buddha. Guru Rinpoche, who himself attained complete buddhahood, concealed many teachings for future generations. In fact, most of these teachings were concealed by Guru Rinpoche’s principle disciple and consort, the Yeshe Tsogyal. The teachings she concealed, called treasures or termas, have been and will be discovered over the centuries by destined meditation masters known as treasure revealers or tertons. Once discovered, treasure teachings are practiced and preserved as they are passed down from teacher to student—often through a line of incarnations of the treasure revealer.

“Termas are considered especially relevant and powerful in the conferring of blessing in this present age. It is thought that terma teachings are custom-made for the time they are to be discovered and disseminated. All beings in the future who are interested in these treasures will all be those who have established a karmic connection with them in the past. Therefore, have joy and confidence. These words of mine are more precious than gold.”